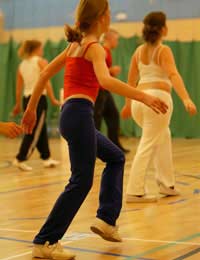 Those innovators of exercise class routines just don’t stop do they? Anyone familiar with the high-energy, feel-good factor that has made BodyPump such as success are going to feel right at home with both BodyAttack and BodyCombat. In essence, they are variations on a theme. And that theme is getting fitter, happier and healthier.

They’re bound to strike the right note with exercise enthusiasts, too, because of the inspiring track lists of the latest sounds that accompany each section of the session. You’ll find yourself simply a slave to the rhythm, to such an extent that before you’ve even had time to check the clock, the instructor is calling cool-down time.

Attack involves sports training moves that are designed to target cardiovascular fitness along with conditioning exercises aimed at both the upper and lower body. Tone and shape are high on the list of priorities, along with calorie burn. Other benefits include both an increase in bone health and density, according to the innovators, through a programme that incorporates low- and medium-impact moves and push-ups as well as aerobic movement. There’s no special equipment needed, either. Just bring yourself, your sportswear and a bottle of water. In common with both Attack and Pump, BodyCombat has both a warm-up and cooling down section built into each class session, to ensure that each individual both starts and finishes in the best possible shape. As the name suggest, Combat is about unleashing your inner energy at an opponent, combining speed and power during punching and kicking routines that will build endurance and deliver a higher level of fitness.

Punching? Kicking? All sounds a little too violent? Well, rest assured that the opponent in question is an invisible one, the class built on non-contact, martial arts-based routines. However, don’t be fooled into thinking you can relax, because in essence you do have an enemy to face up to, and a pretty formidable one, too: namely, your own physical and mental weaknesses that are the result of too many years ignoring exercise. Wouldn’t it feel just so good to be finally facing those demons and giving them a metaphorical black eye? To walk away knowing that you’ve finally laid down a marker about how you want to look and feel.

So what do you need to get started? Well, above all a determination to get fitter. Neither of these two classes are designed for the fainthearted. But they do promise results for those prepared to put the work in. You’ll need to have moderate fitness but don’t worry that you’re not sharp enough for either the training moves of Attack or aggressive enough for Combat. Once the music kicks in and your instructor’s voice starts firing up that adrenalin, it won’t be long before you’re following the rhythm along with the rest of your class mates.

Toning up and feeling fitter is all about having the courage to get moving, and feeding off the adrenalin that accompanies each session. That new you is bursting to get out and face the world. So why hold it back any longer?

All About Salsa Classes: Tone Up and Have Fun